Here's another free pattern for you. It's a cute pumpkin-shaped hat with a rolled hem. It's very similar to some other pumpkin hat patterns I've seen on the internet, but I consider it sufficiently different to publish it here as a pattern. Feel free to use it, but please don't redistribute it without my permission. 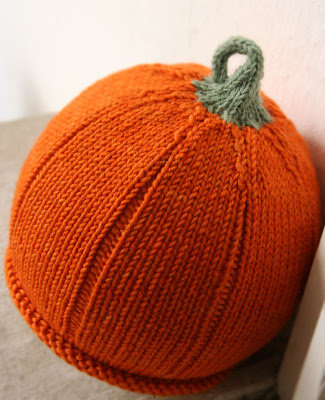 Size: The hat should fit a head of about 39 cm circumference.

Yarn: I needed less than one ball (<50g) Gedifra For You, originally col. 1616 (silver gray), which I had dyed with Kool-Aid (1x mandarina tangerina + 1x orange). For the stem, I used leftovers of Rowan Lightweight DK, which had the perfect shade of green but was unfortunately a bit too thin (I should have used two strands of it).

Place the remaining four stitches on one needle (it has to be a double pointed needle) and knit an I-cord. The stem should be 2-3 inches long. Break yarn and thread it through all stitches twice, then thread it through a tapestry needle. Bend the stem to the side and pull the needle with the yarn to the inside of the stem and down, then weave the end in on the inside. Now weave the other ends in too and you’re done!


*Kürbis means 'pumpkin' in German and is pronounced ['kYrbIs]. The sound [Y] is a close, front and rounded vowel, similar to u in the french déjà vu. If you want to articulate it correctly, try to pronounce i (like in bit), but with rounded lips.

How did you add the Ravelry buttons for your patterns?

Thank you! One of the cutest pumpkin hats I've seen!

i love it! thank you for the pattern!

This is sooo cute, definitely one of the nicest pumpkin hats around!

Thank you so much for the adorable pattern and also the lesson in Hungarian pronunciation!

This little hat is completely cute - and beautifully knitted. I love the garter stitch heart too.
Shirley I.
http://beadbag.blogspot.com/

I can not locate Gedifra For You,tell me, is this a DK or sport weight? I am trying to gauge on both size needles.Just not working for me. "Sigh"
I love your design. Sehr nett

thanks for the pronunciation. It reminds me that in English, the genus name for pumpkins and squash is "curcubita". And such a cute hat!

This is adorable! I've been looking for a lil punkin hat, and this is perfect.

I love this hat! I'm a novice knitter - how do you adjust it for larger sizes like the adult hats in the photo on Ravelry? Thanks!

I love this pattern, but am wondering how to adjust the sizing for toddlers and adults...HELP!!!

This looks beautiful! I'm attempting to make it for my niece currently, and am a bit stuck. How would you enlarge the hat to fit a 18 inch head? Thanks!

This little hat really is charming. I think you have a gift. I'm going to poke around a little more, here, if you don't mind. I love it when people are brave and selfless enough to share what they can do. Thank you.

Your photo shows larger sizes. Can you elaborate on how you made them? I see that others have inquired. Maybe you've posted a reply somewhere. If so, pls let me know where. Lovely hat. I'd like to make one for myself. I love the fall, pumkins and Halloween. Thanks much.

So sweet! Can anyone recommend a yarn substitute for the Gedifra "For You"? That's been discontinued. Or at least just the weight would be helpful. Thanks!

Would you mind letting me know how you would adjust this hat for a man (large head)?

wonderful hat! what is your suggestion for the M1?

Love it!! exactly what I was looking for!

Would it be ok for me to donate this hat?

The knitting group to which I belong knits/crochets only for charities for babies, toddlers, teens, and for chemo patients of all ages.

Your hat is absolutely adorable!

I would like to make this cap for children 4-6 and 8-10.
Would Caron Simply Soft work?

Is a larger size pattern available?
If I were to add a 3" ribbing, how would that affect the size of the body of the cap before the shaping.

I thank you very much for listening.
Again, the cap is darling.

Not sure if I am reading the pattern right, but if I am, I don't think the row "ssk, k5, k2tog, p1" would be the pattern for two rows. If you do this decrease for the first round, by the second round, the purl stitches are in a different spot.

I fixed this by doing that pattern for one round instead of two.

I just love this hat:) I will be making it for my new granddaughter who was born on Oct 29th. Her sister was born on Oct 31st and is going to be six. How many st would I need to increase for her? I am sure that they will look so cute come Holloween!! Thanks for a great pattern.

Okay, this is a nice looking hat, but I just made it and there were a lot of things I had to figure out for myself.

First of all, if anyone wants to know how to enlarge the hat, I would be happy to correspond with you through email. My email address is judyros@pacbell.net.

I feel that the author of this pattern should have spent more time writing this pattern and perfecting it before she posted it. She didn't even remember what size needles she used. She could have figured that out by getting the guage from her finished hat and then making a swatch that was the same guage. Then she talks about the green yarn she used that wasn't the same thickness as the orange yarn, so why mention it?

I used size 7 needles and worsted weight acrylic yarn--Vanna's Choice has nice oranges and greens to choose from and is always on sale. And I see absolutely no reason to use two different size needles. It came out fine without changing sizes.

With size 7 needles I casted on 65 stitches and then added the extra 5 stitches after the rim was knitted by doing the M1. But the M1 increase made a hole, so I changed them to the regular knit one in front and one in back of the same stitch for a much less obvious increase. My hat worked for an 18 to 19" head for a baby with a large head. My guage was roughly 4 sts to the inch, but my swatch didn't work that well. I just had to knit about 2 inches and take it off the needle to try it.

Also you have to switch from a circular needle to double points somewhere during the decrease section.

Hope I didn't offend the author. Just trying to be helpful but also was frustrated with having to figure some things out for myself that were left out of the pattern.

In follow up to the comment above me:
The reason to use smaller needles for the brim is that it makes a neater, tighter rolled edge. Tighter knitting curls more. Looser knitting curls less. I've done a stockinette rolled brim both ways, and it looks better with a smaller needle, though if you don't have one, you can get by without.

here is my finished project (hat made by my mom..baby is mine!)
http://duplex-ity.blogspot.com/2012/10/how-to-make-baby-pumpkin.html
I'd love to link to the pattern if you wouldn't mind.

So adorable! I have a suggestion that I use for many things... to remember where I started and where I need to end up. I take a picture before I start (for example, the needle, the yarn, etc.) and the information stays on my cell phone or computer. This is also a great tip when you take gizmos apart with a lot of wiring, say, your computer or home entertainment system. Take a picture first, before you take it all apart, then you'll know exactly how everything goes back together without the exasperation!

Hi my name is Nicole and someone saw this hat and fell in love with it. I was asked to make it and sell it to her so I wanted to ask if that was ok. It would only be to her, I also informed her it wasn't my pattern and I would want to ask if that was ok first.
I would have e-mailed you this request but I couldn't find an e-mail address, so sorry.
If you could let me know one way or another I would appreciate it.
Thanks
Nicole

Hi Nicole,
feel free to sell the pumpkin hat to your friend. I'm just asking not to redistribute the pattern. Have fun!
Best wishes
Natalja