I've never been much of a blogger person (I guess I don't have that much to say after all :)) and mostly used my old place to post pictures and a few details about my knitting projects and, more recently, to publish my patterns. Now that I can organize my projects much more efficiently on Ravelry, the blogging has stopped altogether. So I finally decided to abandon the old blog and give my patterns a new home. 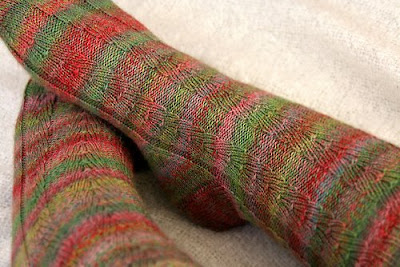 I would never have expected that my first pattern, the Primavera Socks, would become such a success. At this moment, there are more than 200 projects listed on Ravelry. I still can't believe how many people have used my pattern to knit socks either for themselves or to give them to someone else. Can you believe there are actually 141 finished Primaveras out there?

I regularly check the project gallery on Ravelry and I'm very impressed by all the finished socks I see there. Apparently, knitters find the instructions clear enough to follow them - I wasn't sure about this at all when I was writing the pattern, especially since English is not my mother tongue! Even people with no prior sock knitting experience did not seem to have major problems with the pattern. Look for example, what great job otrembarific did with her teal Primaveras - her very first socks!

I was so proud when the first person queued the pattern - now it's 1062 people! Some liked the pattern so much they want to knit it again, others have already done so. If I remember correctly, KnittingPixie's Primaveras was the first finished pair. Many more followed and among them are such beautiful examples as franklin's Violet Primavera Socks or hollyberry79's Vinca Socks - the two even picked the same yarn! Or, check out these beauties, knit by Maja! Some knitters spared no effort to showcase their FOs: Look at the pretty spring themed setting WickedPyssa used to photograph her pink Primaveras or woolwinder's pictures, shot at the seashore. Very nice!

Writing down the pattern for these socks was so much fun and seeing other people actually knit them is so exciting that I definitely want to try to design another sock pattern. Actually, I already have an idea, so stay tuned!

I know I am a little late in saying this, but thank you so much for the kind words about my socks! I love them and you did a great job on the pattern. Thank you!